Knowing the different stages of the mosquito's life will help you prevent mosquitoes around your home and also help you choose the right pesticides for your needs, if you decide to use them. All mosquito species go through four distinct stages during their life cycle:

The first three stages occur in water, but the adult is an active flying insect. Only the female mosquito bites and feeds on the blood of humans or other animals. 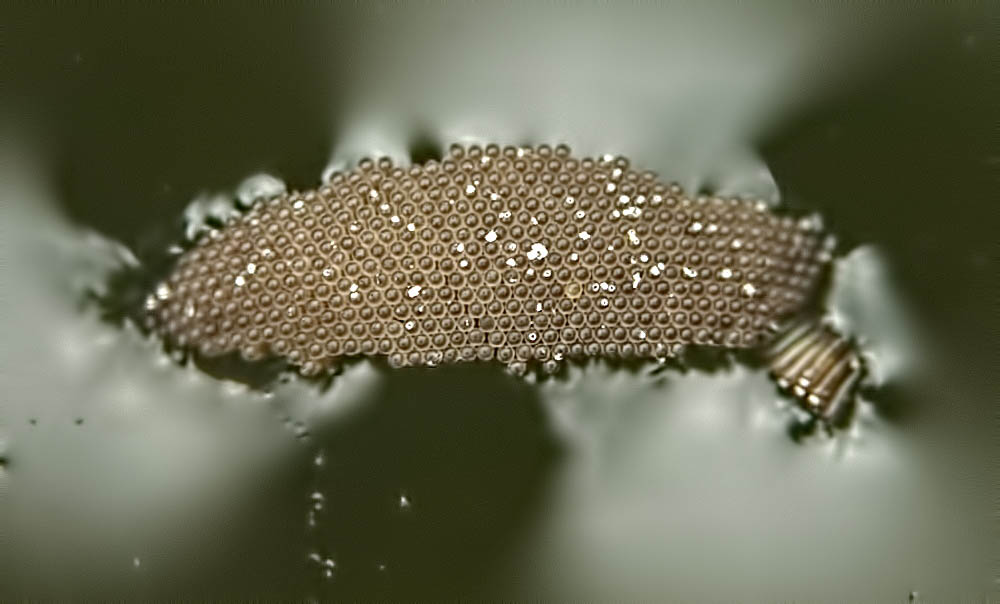 Many mosquitoes, such as Culex pipiens, lay their eggs on the surface of fresh or stagnant water. The water may be in tin cans, barrels, horse troughs, ornamental ponds, swimming pools, puddles, creeks, ditches, catch basins or marshy areas. Mosquitoes prefer water sheltered from the wind by grass and weeds.

Culex mosquitoes usually lay their eggs at night over a period of time sticking them together to form a raft of from 100 to 300 eggs. A raft of eggs looks like a speck of soot floating on the water and is about 1/4 inch long and 1/8 inch wide. A female mosquito may lay a raft of eggs every third night during its life span.

Anopheles and many other mosquitoes lay their eggs singly on the water surface. Aedes and Ochlerotatus mosquitoes lay their eggs singly, usually on damp soil. Aedes and Ochlerotatus eggs are more resistant to drying out (some require complete drying out before the eggs will hatch) and hatch only when flooded with water (salt water high tides, irrigated pastures, treeholes flooded by rains, flooded stream bottoms). Anopheles, Culex and Mansonia eggs are susceptible to drying out during extended droughts.

Mosquito larvae, commonly called "wigglers," live in water from 4 to 14 days depending on water temperature.

Larvae of almost all species must come to the surface at frequent intervals to obtain oxygen through a breathing tube called a siphon. Larvae of Coquillettidia and Mansonia possess modified siphons that allow them to pierce the stems of emergent vegetation in water and draw their oxygen from the plant in this process. Larvae are constantly feeding since maturation requires a huge amount of energy and food. They hang with their heads down and the brushes by their mouths filtering anything small enough to be eaten toward their mouths to nourish the growing larvae. They feed on algae, plankton, fungi and bacteria and other microorganisms. They breath at the water surface with the breathing tube up breaking the water surface tension. The larvae of a few mosquito species are cannibalistic, feeding on larvae of other mosquitoes: Toxorhynchites and some Psorophora, the largest mosquitoes known, are predators of other mosquito larvae sharing their habitat. Their larvae are much larger than other mosquito larvae.

During growth, the larva molts (sheds its skin) four times. The stages between molts are called instars. At the 4th instar, the usual larva reaches a length of almost 1/2 inch and toward the end of this instar ceases feeding. When the 4th instar larva molts, it becomes a pupa. 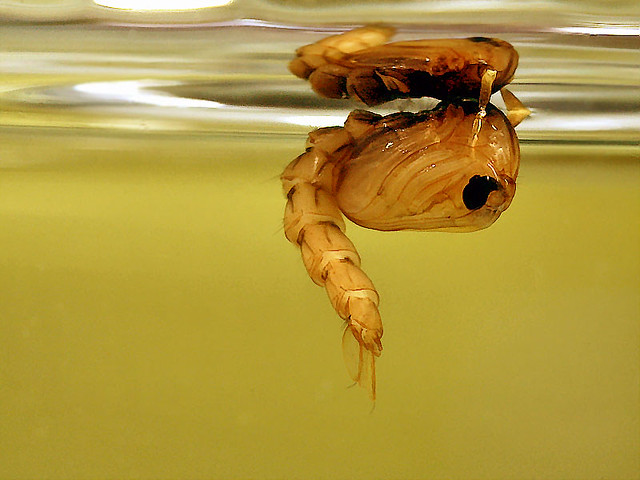 Mosquito pupae, commonly called "tumblers," live in water from 1 to 4 days, depending upon species and temperature.

The pupa is lighter than water and therefore floats at the surface. It takes oxygen through two breathing tubes called "trumpets." The pupa does not eat, but it is not an inactive stage. When disturbed, it dives in a jerking, tumbling motion toward protection and then floats back to the surface. 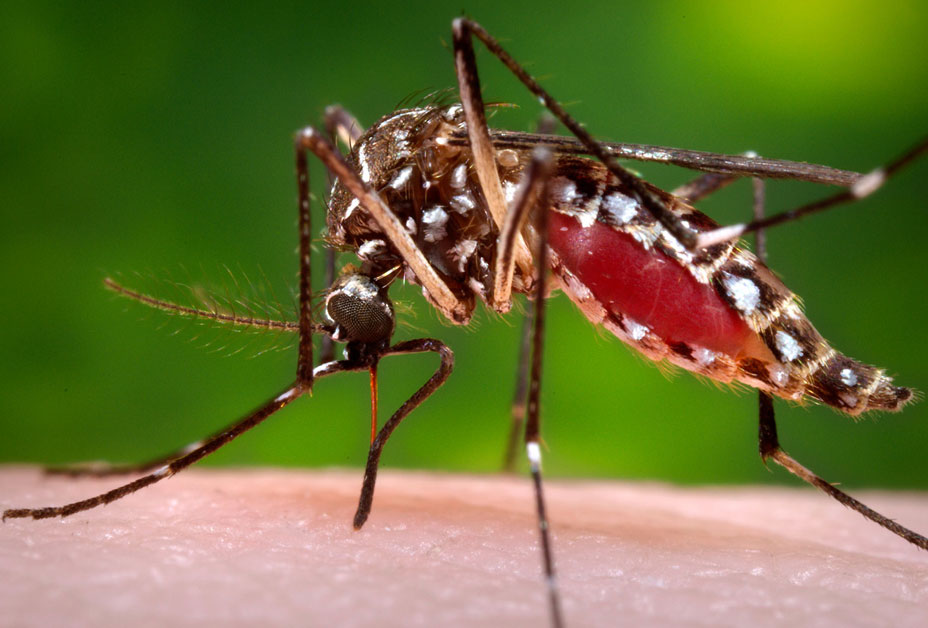 After breaking free of the pupal skin, the adult will rest on the water's surface for a brief period of time to allow its body and wings to dry and harden. Once this has occurred the adult mosquito can now fly. There are over 2,500 different species of mosquitoes in the world and about 20 different species within Midway Abatement District. Different species will have different characteristics and behaviors. This affects things like; active time period (e.g., daytime or nighttime biters), how far they fly from their hatching source, what types of animals they "prefer" to bite (Example; some prefer birds over mammals) and other factors.

Only female mosquitoes require a blood meal and bite animals - warm or cold blooded - and birds. Stimuli that influence biting (blood feeding) include a combination of carbon dioxide, temperature, moisture, smell, color and movement. Male mosquitoes do not bite, but feed on the nectar of flowers or other suitable sugar source. Acquiring a blood meal (protein) is essential for egg production, but mostly both male and female mosquitoes are nectar feeders for their nutrition. Female Toxorhynchites actually can't obtain a bloodmeal and are restricted to a nectar diet. Of those female mosquitoes capable of blood feeding, human blood meals are seldom first or second choices. Horses, cattle, smaller mammals and/or birds are preferred.

Aedes and Ochlerotatus mosquitoes are painful and persistent biters. They search for a blood meal early in the morning, at dusk (crepuscular feeders) and into the evening. Some are diurnal (daytime biters) especially on cloudy days and in shaded areas. They usually do not enter dwellings, and they prefer to bite mammals like humans. Aedes and Ochlerotatus mosquitoes are strong fliers and are known to fly many miles from their larval developments sites.

Culex mosquitoes are painful and persistent biters also, but prefer to attack at dusk and after dark. They readily enter dwellings for blood meals. Domestic and wild birds usually are preferred over man, cows, and horses. Culex nigripalpus is known to transmit St. Louis encephalitis to man in Florida. Culex mosquitoes are generally weak fliers and do not move far from home, although they have been known to fly up to two miles, Culex usually live only a few weeks during the warm summer months. Those females that emerge in late summer search for sheltered areas where they "hibernate" until spring. Warm weather brings them out again in search of water on which to lay their eggs.

Culiseta mosquitoes are moderately aggressive biters, attacking in the evening hours or in the shade during the day. Psorophora, Coquillettidia and Mansonia mosquitoes are becoming more pestiferous as an ever-expanding human population invades their natural habitats. Anopheles mosquitoes are persistent biters and are the only mosquitoes which transmit malaria to man.